Lazzerini - We are travellers!

Whether it's occasionally, seasonally, or daily, fleeting or intense, each of us has taken a journey, and seen this way, we can recognize ourselves in others. Here at Lazzerini, we know plenty about travel because we're travellers first and foremost, commuters, and we want to take you on a virtual trip through the web:  Sara, a 21-year-old recent graduate with an unrelenting passion for photography, will set sail from Genoa on Friday, July 11, with no set destination or itinerary. She's taking a true journey, the kind that isn't planned, driven by pure curiosity. We can follow along, see things through her eyes, and interact with  Sara's Voyage Facebook page.  know because we have all experienced it in one way or another.  The world of people on the move. Who hasn't had the experience of climbing aboard public transport, and looking around while waiting for your destination?  And while you wait, you get to know your seat: just a few minutes ago it was ONE seat among many, and now becomes your habitat.  You settle in, get comfortable, put your headphones there, lay your smart phone here, rendering intimate and private a space that just moments before was utterly impersonal . Between one stop and the next, the space between one passenger and the next grows smaller.  Now we're all closer.  We look around ourselves, and we imagine the stories of our travelling companions. There are those who isolate themselves from the other passengers, pulling a laptop from their briefcase and beginning to work. Some place their back on the seat next to them to avoid being disturbed in the early morning, and then there are those who 澱 The community of travellers knows full well that it's very likely they'll never again see the people seated around them, and that is precisely why life stories come bubbling to the surface: talking with strangers is often easier than talking with someone you've known forever. And then there are those who take a trip within the trip: as they travel they sit, put on headphones, and let their minds travel to far-off places, fantastic places, closer to their loves, farther from daily problems... Watching other commuters becomes a trip in itself: a trip through the words, expressions, and gestures of people you don't know, yet people who are all part of the same great community of people on the move. And we feel as one, we break down the barriers of me and you, we are WE. We are those who travel... we are travellers, born travellers.  In the end, isn't life itself a journey? 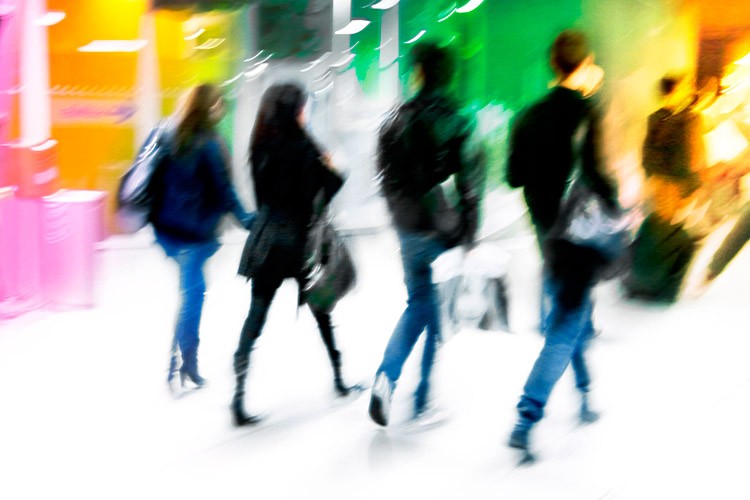